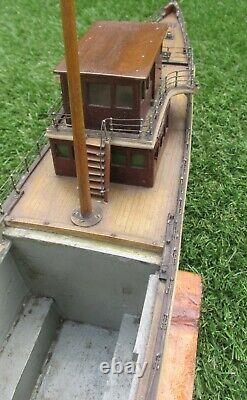 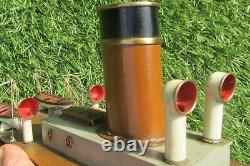 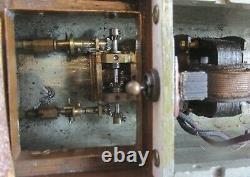 Perhaps loosley based upon the 1912 steam yacht by Camper and Nicholson'Honor'. Very nice patina in the deck but the paint surprisingly shows little signs of age other than perhaps a change in the cream, making this a fantastic display piece. Complimenting the nice original 100 year old paint and rich texture of the deck, the brass trim of the funnel is either gilded or retains its original shine through its varnish. The mast is wood and might benefit from rigging through the tiny eyelets and corresponding small eyelets on the deck. The beautifully made steamed bent-wood gunwales pinned on the stern are not seen on later BL boats, presumably as they would not take a lot of knocking about in play.

The brass keel is unusual as it does not extend the whole length of the hull as it does on later BL boats. Aping that seen on pond-yachts. The rear sklight has glass windows and that on the top deck is brass or copper. I think the funnel brass. The air vents / dorades look different between those fore of the funnel and those aft, but look totally original.

A lot of these details including the cork lined hatch on the rear deck are missing on later B. Boats - the labour would make such earlier boats too expensive. A few plank seats are missing from the lifeboats and the all original fabric wrapped wiring is loose - possibly also age hardened.

An output drive is missing connecting the motor to one of the propellers, however the original drive piece is still present. To put it back would be quite a fiddly job as the nuts and screws are tiny.

This probably accounts for the fact that the boat survives in excellent cosmetic condition. The wheelhouse contains wheel and binnacle behind a sliding door. Some of the sides of the lower cabin are distorted with age leading to a crack in one side. However - being on the lower deck means that this doesn't really notice. This is a very long term effect as the wood is hard in its slightly distorted shape.

A rare boat - which I've never seen before -possibly made for a retail store. The later'Azalea' looks to be quite closely related. A stunning antique display piece.

Then described as'the most luxuriously appointed yacht in the world'. The carry box is falling apart and looks its age.

The sides are falling out and has some old woodworm. Could possibly be restored with a new sides etc - however it has done its job of protecting the boat for more than a hundred years and in itself is quite a scarce item. The motor works, driving the twin props - if it is connected directly to the coil on the magnet and the opposing connection of the motor. I tested it for a short time on 12 volts. (probably better to use a lower voltage) However one of the wires to the battery from the motor has broken (the copper having age hardened over 110 years) where it is screwed to the motor terminal and will need fixing / replacing, if it is to be used.

I have left it original as it is - as piece of wire inquestion is the original and has cloth fibre coating on the wire. Complimenting the nice original 100 year old paint and rich texture of the deck, the brass trim of the funnel is gilded, so that it still shines after a hundred years, dominating the appearance of the boat -which , whilst in good condition has - unlike the shine of the gold, aged 100 years.

At first sight this looks a bit garish for a Bassett Lowke boat - which are usually more conservative in decor - however, such yachts actually derived from the so-called'Gilded -Age' - when gilding was widely used in their decor to reflect the wealth of industrial magnate owners. Indeed such'flashy' detail could be seen for miles. And it still can on this boat.

This would have been a toy for such wealthy owners. The level of finish is better than standard boats in BL catalogs.

This neatness / attention to detail, is not seen in other BL boats. The F7 destroyer I have listed has similar cut-outs for the funnels - but the holes are very ragged and not accurate ovals - even though it is beautifully made from the view of its external appearance. The rear sky-light has glass windows and that on the top deck is brass or copper. The air vents / dorades - the rims painted gold or gilded, look different between those fore of the funnel and those aft, but look totally original.

An output drive was missing connecting the motor to one of the two propellers, however the original drive piece and its grub screw is still present and I have reconnected the gear box to the prop shaft and everything now works as it should when the motor is powered up. I took the photos of the gearbox at the bottom with the drive missing - but since decided to fit it back on as shown in the video of it working and in the photo above.. This involved fiddly playing about with the screws holding the gearbox to the hull plate. This missing drive probably accounts for the fact that the boat has not been used much over its life and looks pretty much unused and survives in excellent cosmetic condition.

The lined wood deck of the funnel section has somewhat more deeply grooved planking. The hull is carved and has an inbuilt battery compartment. Some of the sides of the lower cabin are distorted with age leading to a vertical crack at its rear in the starboard side. This is a very long term effect as the wood is hard in its slightly distorted / bowed, shape.

A rare boat - which I've never seen before - possibly made for a retail store. Possibly made bespoke for the owners of the actual boat. There is no stand - I cut a groove in a piece of wood in order to accommodate the unusual keel. Get Supersized Images & Free Image Hosting.

The item "Honor- The Most Luxuriously Appointed Yacht In The World 1905 Bassett Lowke boat" is in sale since Sunday, September 5, 2021. This item is in the category "Toys & Games\Vintage & Classic Toys\Clockwork/Wind-Up".